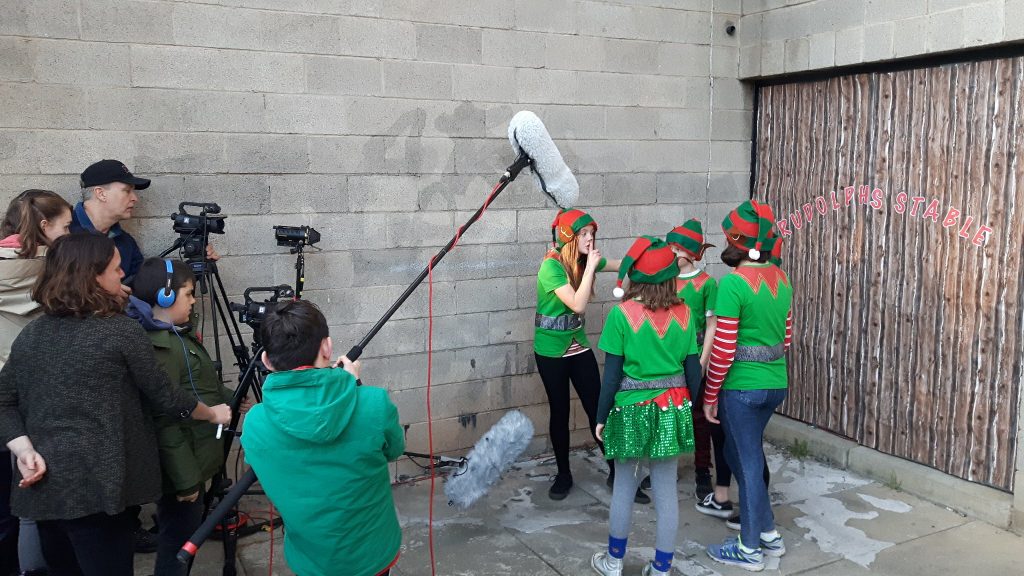 POSTED ON 6 NOVEMBER 2018 BY FILM ACADEMY

FILMING ON LOCATION: NOTES FROM THE SET

We have gadgets for everything in the film industry, but as we’ve all been learning, the one thing we still can’t control is the weather…

The forecast was so variable it kept the week a bit more exciting than we might have liked as the big day approached. Thankfully we were lucky, with a full day of autumn sunshine.

The weather was a little chilly but we were well prepared with the help of our unsinkable parent volunteers Karen and Paul, who put up a shelter tent for the equipment, and were joined later by Yasmin in keeping everyone supplied throughout the day with some excellent and warming hot chocolate. Thank you, Karen, Paul and Yasmin: you really saved the day!

With the equipment all ready to go and a big shot list to cover, the teen group still needed three rugby balls as props for their film (working title: ‘Rugby’!)

Luckily, our friends at the Portobello Rugby club stepped in, and another parent volunteer, Annabel, drove like a (ahem) fast but sensible person to fetch them, assisted by trusty six year old Tommy, who carried one of the rugby balls himself. Thanks Annabel and Tommy, and thank you Barry and the Portobello Rugby Club!

The next hero of the day was our acting tutor Rachael, who has been coaching the students in acting skills worthy of their future careers as Hollywood film stars, and encouraged some great performances from the kids. Nice job by all involved!

Filming on Location: Putting the Teen Group’s Skills into Practice

The beautiful autumn weather gave the crew a great opportunity to learn about outdoor filming on location, working with the long shadows and low angled sunshine.

The breeze also made things tricky at times for the teen group’s sound recording, but that’s exactly the kind of real world challenge the kids learn to work with in The Film Academy.

The teen group’s final shot was filmed as a drone sequence, an exciting chance to experience how another piece of professional film equipment is used in practice.

It was a race against time for the teen group, getting as many of their scenes as possible in the can, fuelled by more of that well-timed hot chocolate, and they almost pulled it off.

The teens all did a great job, but in the end they were out of time with one scene left: another common experience in real world filming. They will now have the challenge of working around this in their regular weekly Film Academy classes at Edinburgh College.

In the afternoon, it was the 9-12s group’s turn for their film, ‘Let’s Save Christmas’, and the scene couldn’t have been more different.

Gone were all the rugby props, and instead our filmmaking mentor Glenda had transformed a small garage area at the back of the sports centre into the most Christmassy scene you could imagine:

Awesome job, Glenda, and if Christmas ever really does need saving, we know who to call!

Once all the props, set dressing, cameras, sound equipment and crew were in place, there wasn’t a lot of room left for Rudolph and the cast, but the kids did great work and we wrapped all three scenes just 15 minutes over schedule.

Good job everyone. We can’t wait to see the results!

Who’s excited about our Weekly Film Academy starting on Friday? We are!! 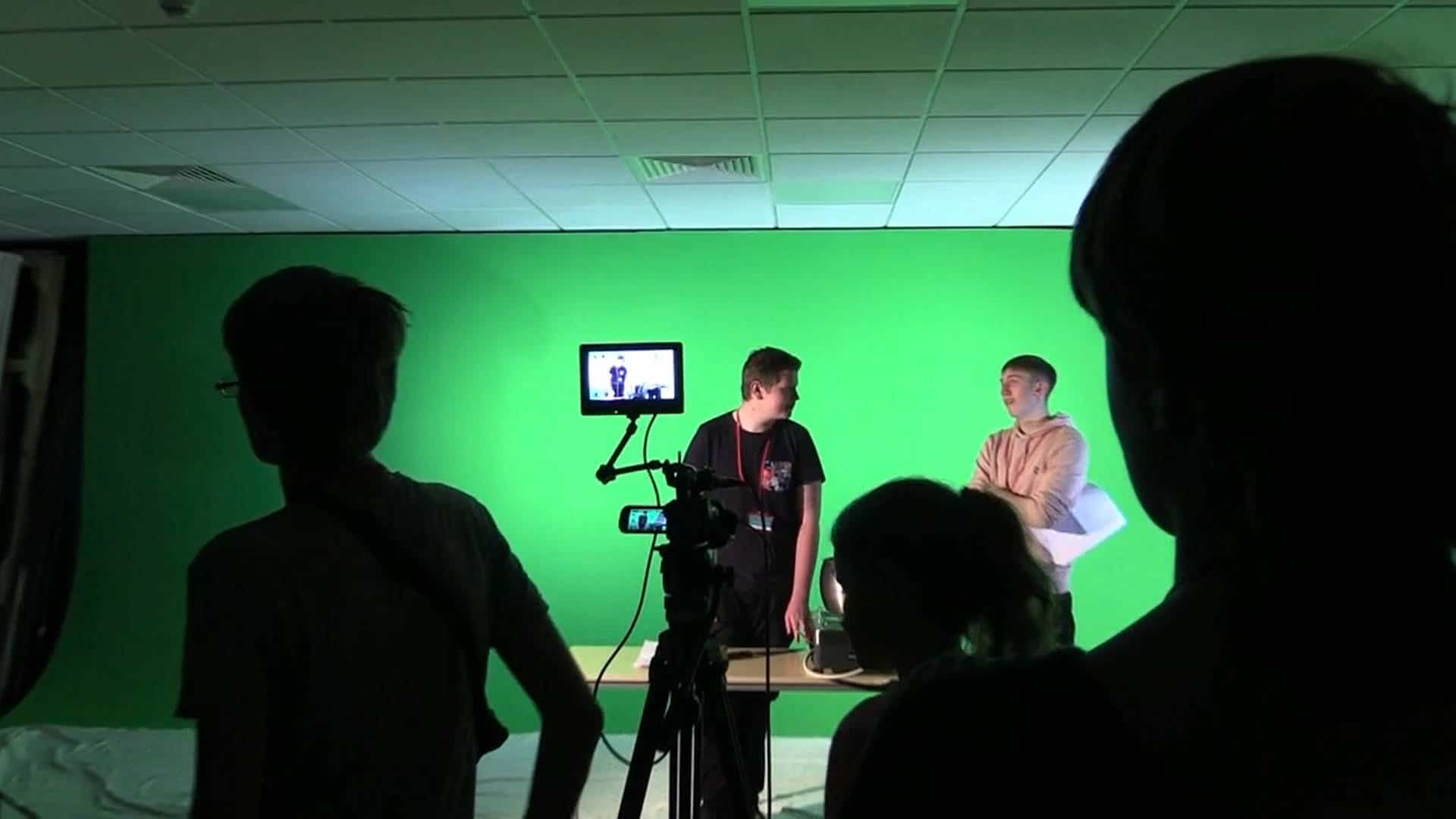 Look behind the scenes at The Film Academy Edinburgh summer camps! 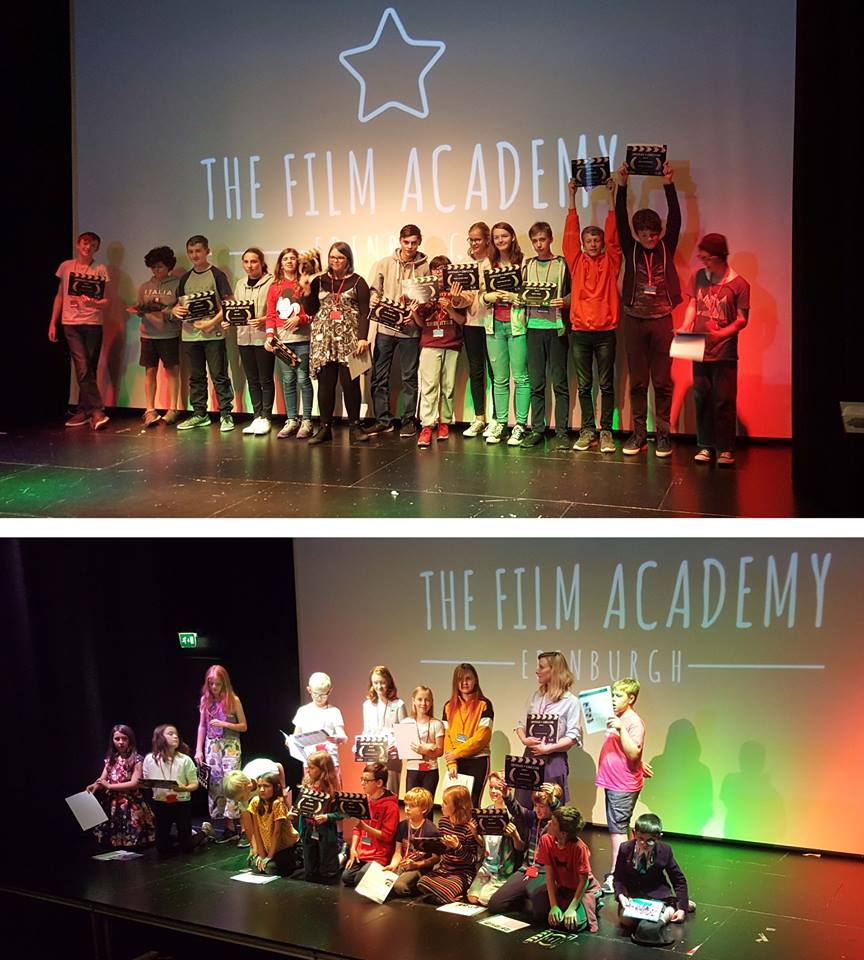 Congratulations to our August filmmakers!

Join us now to be a part of our weekly after-school filmmaking academy in Edinburgh from September: 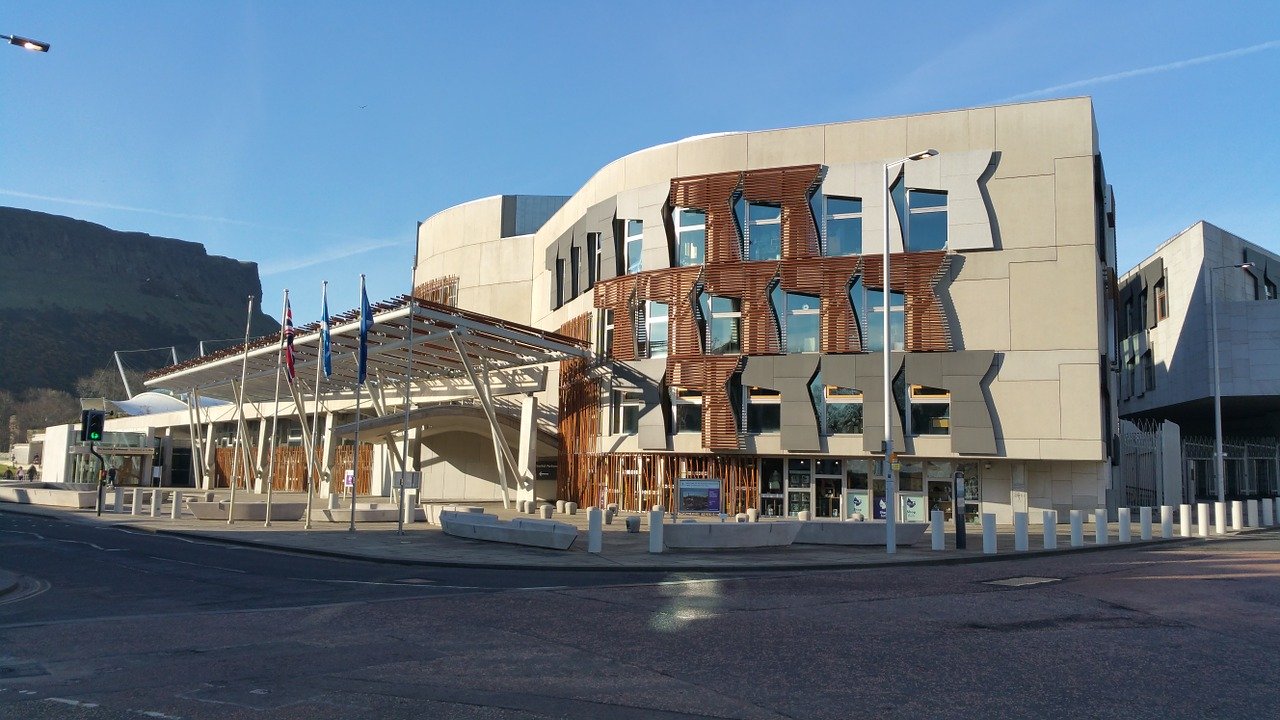 Excitingly, on 13 June Gordon MacDonald of the Scottish National Party, submitted a motion in the Scottish Parliament at Holyrood, in support of the Film Academy Edinburgh. Woohoo! The motion was supported by 13 other MSPs.

Maybe we should ask them if they’d like to enrol?!

Here’s the link: The Film Academy in Scottish Parliament!

And here’s what they said: 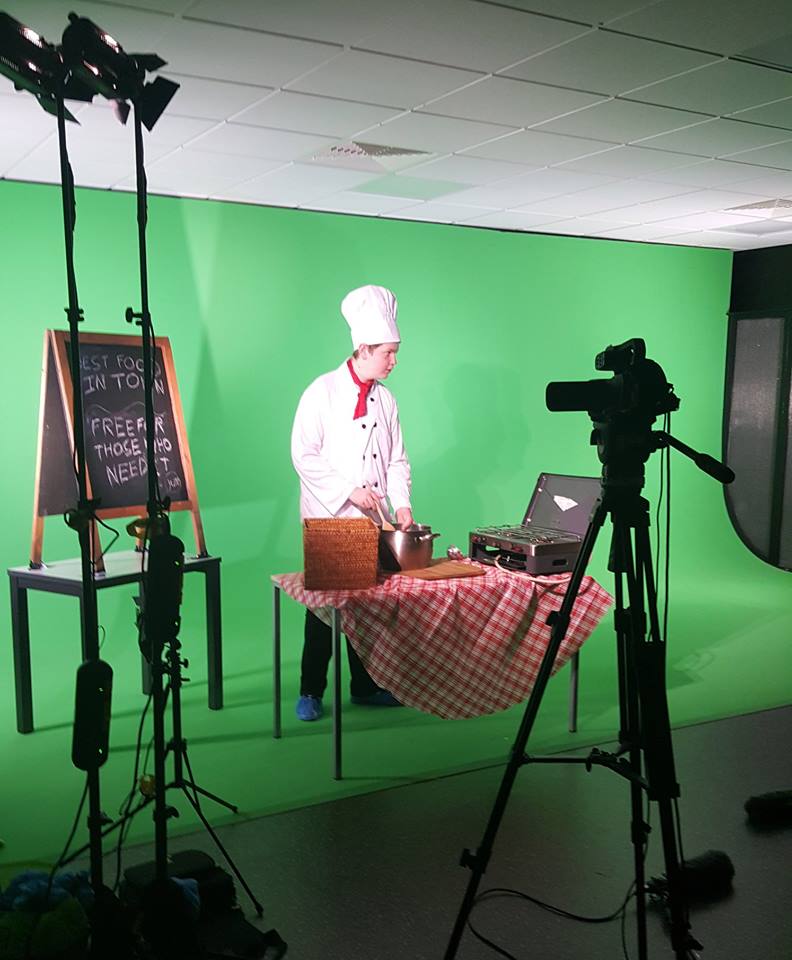 After school filmmaking classes start on Fridays in September! 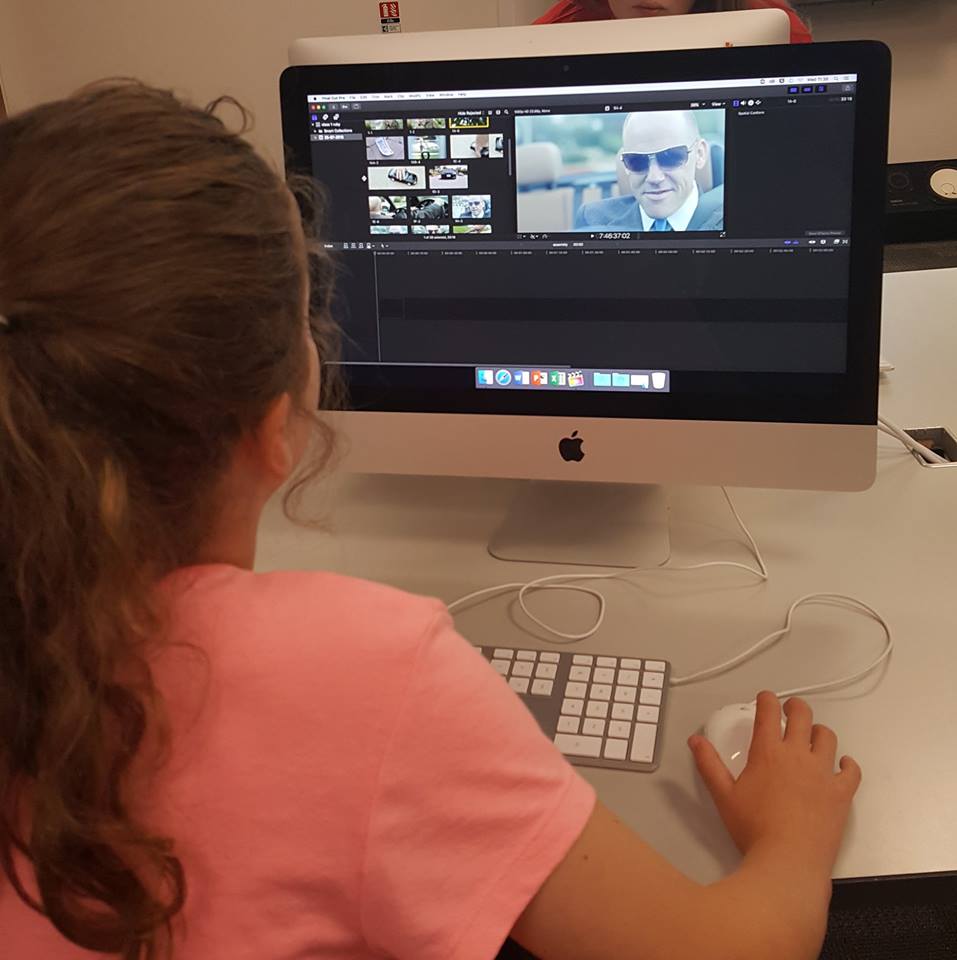 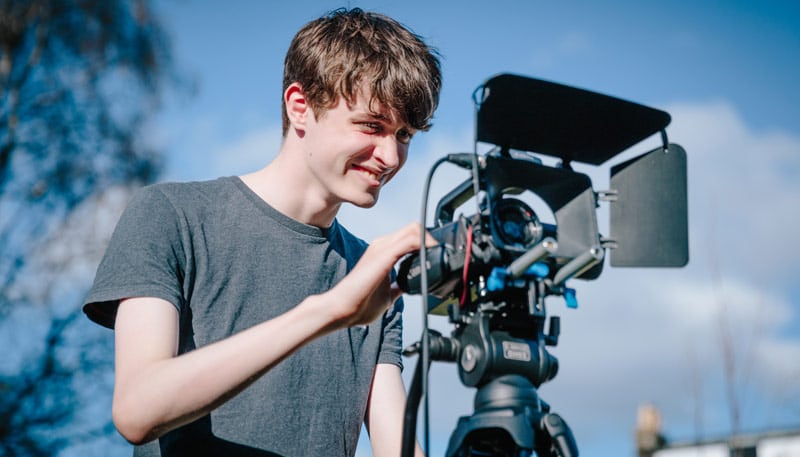 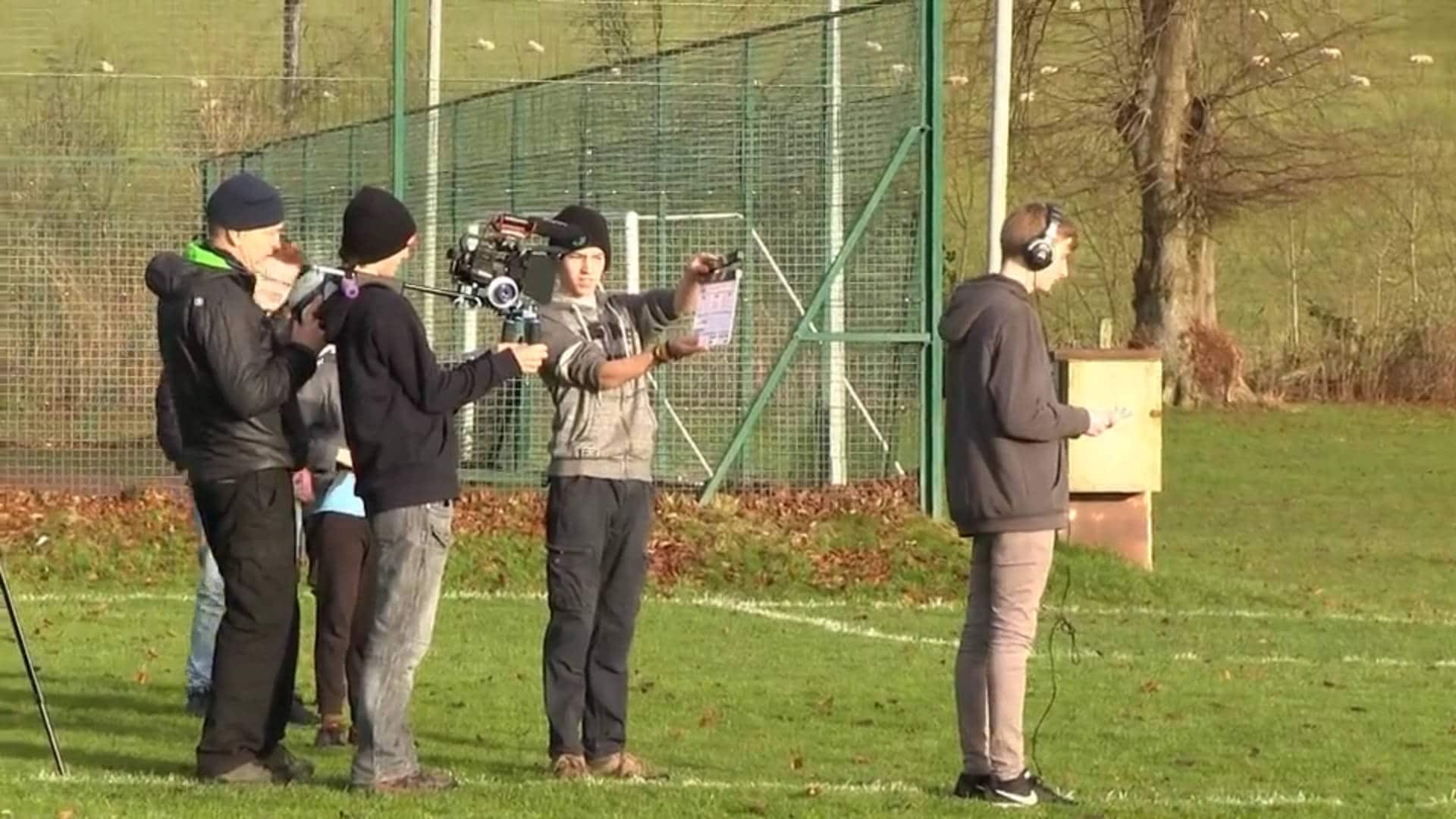 How about making a film this summer?

The Film Academy Edinburgh will be running 5-day Summer Schools from 23 July 2018 and Weekly Film Academy starting on 7 September 2018. 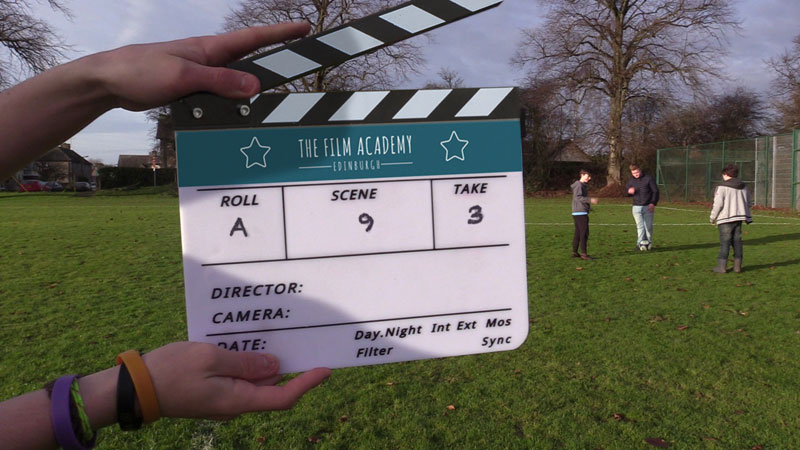 The Film Academy Edinburgh: Our Newsletter

Stay up to date with our news: click here to join our newsletter!

FILMING ON LOCATION: NOTES FROM THE SET
It’s Coming Soon! Countdown to our Weekly Film Academy!
Our Filmmaking Summer Camps: Behind the Scenes
Our August filmmakers!
MSPs SUPPORT THE FILM ACADEMY IN PARLIAMENT
It’s Shoot Day!
July Summer School: Preparing for Shoot Day!
LAST CALL FOR SUMMER CAMP!!!
How about making a film this summer?
And, Action!